THE EVOLUTION OF
BIOFILM IN
AUTOCLAVABLE AIR WATER SYRINGE TIPS

WOULD YOU WANT THIS IN
YOUR MOUTH?

Metal air water syringe tips are anodized on the outside, but the inside is raw metal, that begins corroding from the first use. As they continue to corrode over time, fissures develop, which are perfect pockets to collect biofilm, blood, tissue and materials debris.

These elements are virtually impossible to remove from the micro lumen, and continue to collect over time and usage. The collection of such debris prevents steam condensation on the inner walls of the lumen, thus impeding sterilization in the autoclave.

Placing metal air water syringe tips inside an ultrasonic solution, introduces more biofilm inside the lumen through the vibration action. The more the solution is used during the day, the more biofilm develops in the solution. 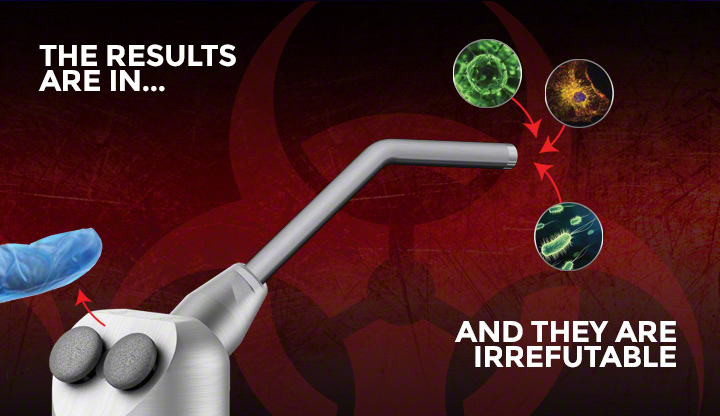 In 2013 an investigation into an Oklahoma dental practice confirmed a case of patient-to-patient hepatitis C transmission. 89 of this offices' dental patients tested positive for hepatitis C, but only one case was directly tied to this dental practice. Four cases of HIV were also found in his patients; the CDC is conducting genetic testing to determine whether those cases are tied to dental office.

"This is the first documented report of patient-to-patient transmission of hepatitis C virus associated with a dental setting in the United States, state epidemiologist Dr. Kristy Bradley said. "While dental procedures are generally safe, this reinforces the importance of adhering to strict infection control procedures in dental settings."

The persistent presence of organic and inorganic deposits in the lumens (of air water syringe tips) could delay or even prevent penetration of sterilizing vapors.

A number of reports have demonstrated the presence of accumulated deposits in metal air water syringe tips that have been reprocessed many times between patient uses. In some instances, the items were cultured and found to be sterile after autoclaving, while other studies demonstrated inconsistent sterilization outcomes.

The Dental Advisor conducted its own tests in their Biomaterials Research Center and found microbial contamination in approximately 10% of the metal air water syringe tips tested, and concluded:

A general infection control principle states that sterilization of reusable devices requires pre-cleaning. In the particular instance of air water syringe tips, the small lumen openings preclude visual examination of accumulated contaminants on the rough internal surfaces.
Failure to detect the presence of accumulated debris and the inability to clean the lumens therefore provides strong support for the routine use of disposable air water syringe tips.”

ST LEONARDS, Australia/ DUNEDIN, New Zealand: Owing to their internal construction, air water syringes commonly used in dentistry are generally prone to bacterial contamination. Using disposable rather than non-disposable air water syringe tips however could potentially decrease the risk of cross-infection between dental procedures, even when the latter kind have been thoroughly sterilised several consecutive times, researchers from New Zealand have reported in the latest issue of the Australian Dental Journal.

Of 68 used non-disposable air water syringe tips tested for microbiological growth, almost 40 per cent were found to be harboring different kinds of bacteria after having been sterilised with a Class B autoclave. According to the researchers, the level of contamination did not decrease significantly regardless of the number of additional sterilisation cycles the tips were run through. Flushing the instruments simultaneously with dental air and dental water before the cleaning and sterilisation processes also resulted in no difference to the level of contamination, they said.
While control air water syringe tips of the disposable kind also showed contamination, the level was significantly lower.

For the study, new and used non-disposable air water syringe tips from the urgent care unit at the School of Dentistry of the University of Otago in Dunedin were investigated. The research was funded by ACTEON GROUP, a French manufacturer of dental equipment.

IF YOU CAN'T CLEAN IT, YOU CAN'T
STERILIZE IT

The Dental Advisor Report only confirms results from other testing labs, dating to 1994, in which a university study proved that it is virtually impossible to clean the interior surfaces of a metal air water syringe tip, required for sterilizaiton. Or, as another expert concluded in agreement with American Dental Association infection control protocols:

"If you can’t clean it, you can’t sterilize it.” He then added: “The disposable plastic air water syringe tip is the surest way to avoid cross-contamination from patient to patient."

A 2009 article in a leading European dental publication echoed these findings and cited the British Dental Associations 2003 recommendation to use disposables whenever possible.

From a 1997 OSAP report: "The bacteria that enter the tubing are able to adhere to the lining of the tubing and then multiply. Bacteria are continuously released from the surface of the biofilm into the flowing dental water in the line. Patients and clinical staff are then exposed to these planktonic micro-organisms."

According to a 1999 study by Dr. Raghunath Puttaiah of Baylor University, a leading expert in infection control in dentistry, ultrasonic cleaning does not remove all bioburden from within the lumen of metal air water syringe tips. And, although these tips meet sterilization standards, accumulation of internal bioburden over time can compromise sterilization procedures.

In addition to numerous other reports that agree with these findings, Dr. Martin Fulford, BDS, DgDP, FibMS summarized the situation as follows: "The inability to pre-clean the inside of traditional metal air water syringe tips, coupled with the unpredictable nature of steam penetration through fine lumen, means that effective sterilization of such air water syringe tips cannot be guaranteed. Therefore, the use of a disposable air water syringe tip to cut cross-infection risk is to be strongly encouraged."

Sorry for the inconvenience, we are currently uploading new and exciting rewards.

Please contact a Starz Tipz® sales representative for any question or inquiries.